A few miles east of Bellingham, Washington, state route 542 (SR 542) crosses Anderson Creek at a beautiful intersection that until recently was prone to severe flooding. The original roadway consisted of wooden bridge, which was replaced in the 1930s by two bridge culverts and more than 40 feet of earthen fill, which caused increasing and recurrent safety and environmental concerns beginning in 2009. The entrance to the bridge culvert would become blocked with debris, causing upstream sedimentation, and because the culvert sat nearly 30 feet below the highway surface, the removal of the debris was hugely problematic and required several road closures. The debris buildup would cause flooding and also led to the stream becoming dammed against the up-slope, which caused water to pipe through the earthen fill. This was a process that could eventually cause the entire structure to collapse. In addition, the flooding and debris buildup was inhibiting the safe passage of fish through the creek. This bridge was becoming a severe transportation and environmental hazard, and in 2010 the Washington Department of Transportation (WSDOT) decided that a complete overhaul was necessary. 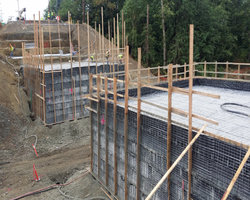 This $8.1 million project began with the removal of the existing double-box culvert and the fish ladder, which had become functionally deficient. The existing earthen fill was then dug out, leaving room for a new lightweight fill. Part of the problem with the existing structure was that the roadway was built directly on the creek’s soft-soil embankments, compounding the sedimentation and collection of debris in the waterway. To reduce the load placed on the surrounding soft soils, the new bridge would be built on concrete abutments that would support the embankments and the new 350-foot bridge. The specialty installer in charge of the cellular concrete installation, Pacific International Grout Company, chose to use Aerix Industries AQUAERiX pervious cellular lightweight concrete for the bridge abutments. The use of AQUAERiX would reduce the roadway’s load on soft soils and provide the permeability needed with a minimum compressive strength of 100 psi, giving this new bridge the stability it needed to handle the weight of traffic. The AQUAERiX was combined with a cement mixture to create a consistent, pervious material with a density of 25 pcf. The concrete was then installed using two-foot vertical lifts and pumped a total of 2,500 feet. Pacific’s three-person crew installed over 9,500 cubic yards of concrete to create two 50-foot bridge abutments. The concrete was tested after being in place to ensure its density and perviousness, exceeding a compressive strength of 100 psi and meeting the WSDOT specifications. 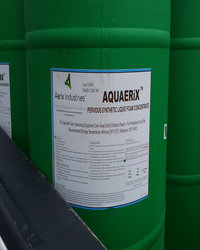 The use of AQUAERiX enabled this project to be completed rapidly, with less than three months from start to completion of the bridge construction. This new bridge not only saved time but also saved money, eliminating WSDOT maintenance and monitoring requirements. AQUAERiX also provided the permeability and compressive strength needed for safe travel over the creek, while reducing the load placed on the surrounding embankements and helping to restore this natural waterway. Because it is environmentally friendly and helps to filter contaminants that can adversly affect soil and water, AQUAERiX also helped to establish a clean passageway for wildlife. With Aerix AQUAERiX, SR 542 is now back in working order, providing safe travel for nearly 7,700-11,000 vehicles each day and maintaining this northwestern state’s natural beauty.