While sometimes appearing relatively small, sinkholes are more dangerous than you might think. Not only are they often much larger underground than they appear, they can collapse rapidly and cause tremendous safety hazards,especially when underneath roadways. Earlier this year, when a sinkhole appeared underneath Route 30 in Chester County, PA, the Pennsylvania Department of Transportation (PennDOT) knew that remediation must be completed as thoroughly and as quickly as possible. 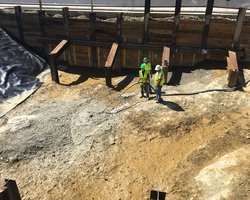 PennDOT called on engineering firm Gannett Fleming to manage the remediation design. The team at Gannett Fleming chose to use pervious cellular concrete as the foundation for the newly remediated median and highway, knowing that this type of concrete would eliminate the potential for hydrostatic pressure buildup underneath the roadway. Gannett Fleming chose to use Aerix Industries AQUAERiX pervious cellular lightweight concrete (PCLWC), as it would provide the compressive strength needed for this highly traveled roadway while also reducing the load placed on the underlying soils. The AQUAERiX PCLWC was installed in five short days by the crew from A-Deck. A-Deck pumped 1,200 cubic yards of Aquaerix through a three-foot hose for the four-foot lifts to install the concrete. 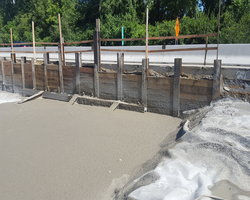 Route 30, which runs east to west, spanning the entire state of Pennsylvania, carries thousands of vehicles each day, and is vital for commercial transportation as well as daily commuters. The use of Aerix’s AQUAERiX PCLWC enabled this highway to be remediated much more quickly than it would have been with the use of other competitive products. In addition, AQUAERiX provided long-term strength and performance by eliminating the potential for hydrostatic pressure buildup underneath the remediation area, which means that Route 30 will be able to holdup underneath the daily pressure of vehicles for years to come. 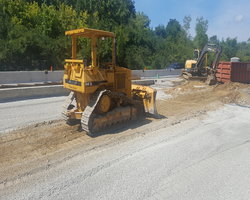